Why IAF inducted CH-47 F Chinook Helicopters when Mi-26 was already there. 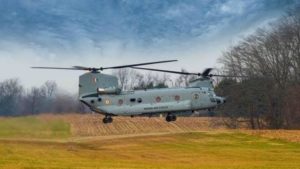 Indian Air Force inducted four CH-47(F) in a formal ceremony at Air Force Station Chandigarh in its 126 Helicopter Unit. IAF has ordered 15 of these Helicopters and these all are expected to arrive or join the IAF by the end of 2020.

Chinook or CH-47(F) is an upgraded version of its CH-47(D) which has been rolled out from the Boeing Facility in Pennsylvania on 15 June 2006 and took its first flight on 23 October 2006.

For long the IAF had depended solely on its small fleet of Russian built Mi-26 helicopter, which is still the world’s largest and heaviest payload helicopter. The Mi-26, with an enormous payload capability of 20 tonnes, had provided yeoman service for more than two decades. Starting with a fleet of four aircraft, the Mi-26 has played extensive role in meeting major airlift requirements of material, machinery, and men, for the military and civil administration in the Himalayan border regions.

But when we already has these machines into our arsenal then why did we went for the Chinooks. Well these are the reasons

Four Mi-26s were inducted into the arsenal of the IAF in 1985–1986. But they have never been used the way it should have been. The serviceability of the Mi-26 was staggering somewhere to 60% in 1990 only and that too went down to 40% by the coming years.
The Projected Flying Hours for the Mi-26s were put to 50 hours per month. But that was never been achieved. The flying hours remained at 11–22 hours per month even after that.

After every Total Technical Life/TTL of an aircraft, it has to undergo Overhauling. The second overhauling of the Mi-26s came in around 2012. But these aircraft could not be sent to overhauling and neither they could be made air worthy, thus the aircraft ended its TTL by this time. Thus leaving only one of its being airworthy by 2015 and that too with just mere 100 hours.
Secondly IAF already lost its one Mi-26 that is Z3076 in an operation during the building of the Railways in Kashmir. That means already reducing the fleet to three helicopters and out of that only one was being airworthy.

And finally in 2015 the whole Mi-26 fleet was grounded. And from very then the Heavy Lift Capacity of IAF was suspended until Chinooks were inducted.

Well why Chinooks were inducted, to bridge the gap which IAF somewhat lost in 2015. May be Chinooks can’t match the Mi-26 and neither Mi-26 can match the Chinook in its capability but IAF got its Heavy Lift Capability back.

Now how its boosts the IAF’s Heavy Lift Capability

When Mi-26 was in active duty, IAF has used it in number of HADR(Humanitarian Assistance and Disaster Relief) Operations in Kashmir and other places. Thus in the same way IAF would be utilising the Chinooks in these operations.

IAF has used the Mi-26 as cranes in carrying number of things. Indeed IAF made a record when it flew a crashed civilian aircraft from Kangra Airfield under-slung for 3.15 hours. Thus Chinooks can do the same in case needed.

Chinooks could also deliver Artillery and Guns under slung. Like it could carry the M777 Howitzers Light Weight Guns for Indian Army. And including it the troop carrying capacity would always be there.

As opposed to the small fleet of three Mi-26 helicopters, the larger fleet size of the CH- 47 F(I) would provide the IAF immense flexibility and availability of aircraft for a variety of tasks. It will provide a boost to the construction of infrastructure and border road projects, long overdue. Border Roads Organisation would get a fillip to its long-delayed road construction projects in the north-east. Our continued requirements of aerial maintenance in remote regions will be better served with this new capability, as also for critical needs of HADR operations, in missions for transportation of relief supplies, and evacuation of refugees. The IAF plans to deploy the two squadrons, one in the Western sector in Himachal Pradesh and adjoining Himalayan regions, and the other in the East sector in Assam/Arunachal Pradesh.

Add to it CH-47 F is a Tandem Rotor Helicopter. And this gives an additional edge to these Helicopters. Tandem Rotors used Counter Rotating Rotors. Now this helps to counter the torque hence produced. Actually there being two Rotors helps to counter the torque produced, thus whole of the power from the engines could be used for lift against the conventional helicopters. That is in Layman’s language, more output of power and more efficient.

Apart than that Chinooks could also be used in Special Operations. Remember this picture from Afghanistan. This picture created a stir. Being gradually smaller than Mi-26, Chinook can carry out number of operations like this. 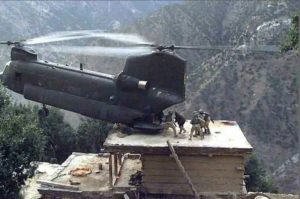