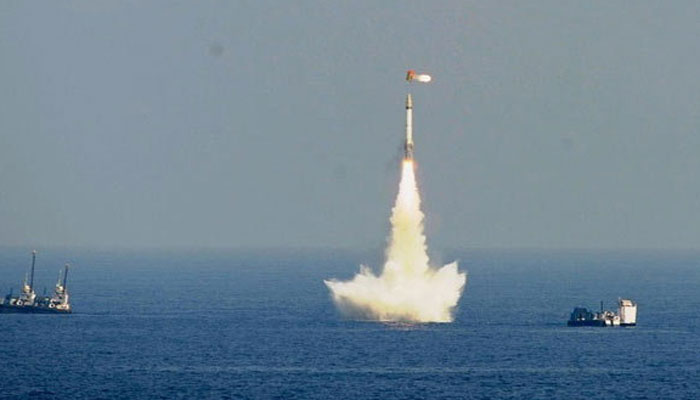 On Sunday, the Defence Research and Development Organisation (DRDO) successfully carried out a test launch of the K-4 intermediate-range, nuclear-capable, submarine-launched ballistic missile (SLBM) off a submerged terminal near Andhra Pradesh’s coastal line. Although no formal statement has been made by the DRDO or the Ministry of Defence, a Notice to Airmen (NOTAM) was issued at the start of January over a 3,400 km stretch of the Bay of Bengal between 19 and 21 January.

The test, is the latest development in the integration of the K-4 SLBM, reported to have a range of 3,500 km, and capable of carrying a 2-tonne nuclear payload. The missile also features a Ringer Laser Gyro Inertial Navigation System, allowing it to move in three-dimensions when approaching a target at hypersonic speeds.

Testing on the ballistic missile began approximately a decade ago, with the last successful test being carried out in “full operational configuration” from the INS Arihant, India’s indigenously built nuclear-powered ballistic missile submarine (SSBN). Along with the K-15 Sagarika SLBM, that is believed to have a range of 750 km, the K-4 will now equip India’s Arihant-class of submarines with upgraded nuclear “second-strike” capabilities, providing the Indian Navy with unprecedented deterrence power.

The 3,500km range of the K-4 will also ensure that India’s nuclear submarines can vastly reduce the likelihood of detection during a mission. Prior to its development, India’s submarines would have had to move within 750 km off enemy shores before being able to carry out an attack. As such, the development of the K-4 will go a long way towards enabling India’s INS-Arihant class of nuclear submarines to fulfil their tactical roles of acting as potent nuclear deterrents, especially against China and Pakistan.

As of reports from 2017, Pakistan had claimed second-strike capability having successfully launched an SLBM of their own known as Babur III, with an alleged range of 450 km. It had also struck an agreement with China in 2015 for the purchase of eight Type 41 Yuan-class diesel-electric submarines. China’s Jin-class of nuclear-capable submarines though are, reportedly, already armed with SLNMs with a range of 7,200 km.

India is also currently working on the K-5, which is expected to have an estimated range of 5,000 km. However, the S-5 and any further upgrades are being developed for India’s second-generation class of ballistic missile submarines (SSBN). It has also been reported that the DRDO has been given approvals to develop the K-6 SLBM as well, expected to have a range of 6,000 km.